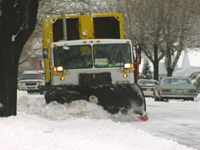 Any time we get over 3 inches of snow, the City could declare a MAJOR snow emergency. What does this mean?

A MAJOR snow emergency will be declared through radio, television, internet, text message, or other means by the Director of Public Works. You can even find out about MAJOR Snow Emergencies immediately by signing up for alerts sent directly to your phone. Just visit our Notify Me page, scroll to the heading named Alert Center, and sign up for notifications under Public Works News. That's it!

We declare MAJOR snow emergencies to make sure that we can quickly and efficiently plow streets. Keeping streets clear of large snow and ice piles makes it safer for all drivers, and ensures quick responses from other departments as needed, such as by Police, Fire, and EMS as well.

When the City declares a MAJOR snow emergency, you'll see that declaration blasted on traditional media, social media, and the City website at least 1 hour before it's effective. It will say the start date and time, as well as the end date and time, of the emergency.

The Director will always choose an expiration date, and it will always expire at 3 p.m. on the date picked for the emergency to end. This allows the Director and crews to clear both sides of the street after snow has stopped accumulating.

During a MAJOR snow emergency, here's what changes from normal parking rules:

You will probably notice that MAJOR snow emergencies last a few days after it stops snowing. This is to ensure the City can clear the streets as much as possible. We understand this is an inconvenience, but by adding on a couple of extra days, we can keep streets wider and keep more parking spots available throughout the winter.

Watch for "NO PARKING" Signs Any Time You Park

Make sure to comply with any "NO PARKING" signs, whether permanent or temporary. Any illegally parked vehicles can be towed without notice, so it's very important to keep these regulations in mind!

Please note you cannot park or leave any vehicle unattended on any of the Emergency Thoroughfares in the City, during a declared MAJOR snow emergency. There may be some permitted areas that have posted signs from the Common Council which allow parking on these Emergency Thoroughfares. Such signs shall state “Parking Permitted Between Signs During Snow Emergency” or words of similar effect and shall be posted so as to give reasonable notice of the permitted zone. All vehicles parked in violation of this subsection shall be promptly removed from such emergency thoroughfares immediately at the time when the declared MAJOR snow emergency takes effect. Emergency Thoroughfares shall consist of the major traffic, mass transit, and emergency vehicle routes in the City of West Allis. 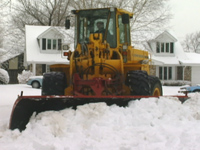 Any vehicles violating the parking restrictions during MAJOR snow emergencies or winter alternate side parking may be ticketed and towed at the owner's expense. If your vehicle has been towed during a snow emergency, contact N & S Towing at 414-476-8697. N & S Towing is located near the intersection of 83rd and National at: